Of course I just had to make time to go to Frida Kahlos family home and studio La Casa Azul in Coyoacán while I’m here. And I’m not disappointed. I love visiting this famous and colourful home of an amazing artist and woman. She was born here and much is intact from when she lived here. This is the kitchen.

Even at the colourful entrance to La Casa Azul I feel exited. Coming here is something I have been looking forward to a long time. And I’m not disappointed. I like this museum because there are rooms still decorated the way they were at the time when Frida lived and worked here, so you get a sense of her life. 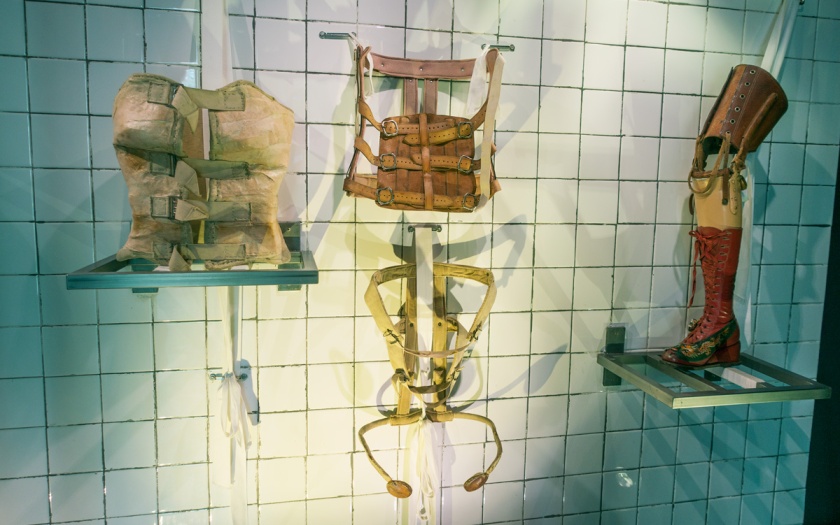 Frida Kahlo became bedridden after a terrible traffic accident when she was young and she was seriously injured by it. She broke her spine and pelvis and had eleven fractures in her right leg and her right foot was crushed. As if that wasn’t enough, a handrail in iron pierced though her abdomen and uterus. It’s heartbreaking to see her the harnesses, corsets and prostheses, items that she had to wear because of the accident. They look like instruments of torture. And these are only some of them… 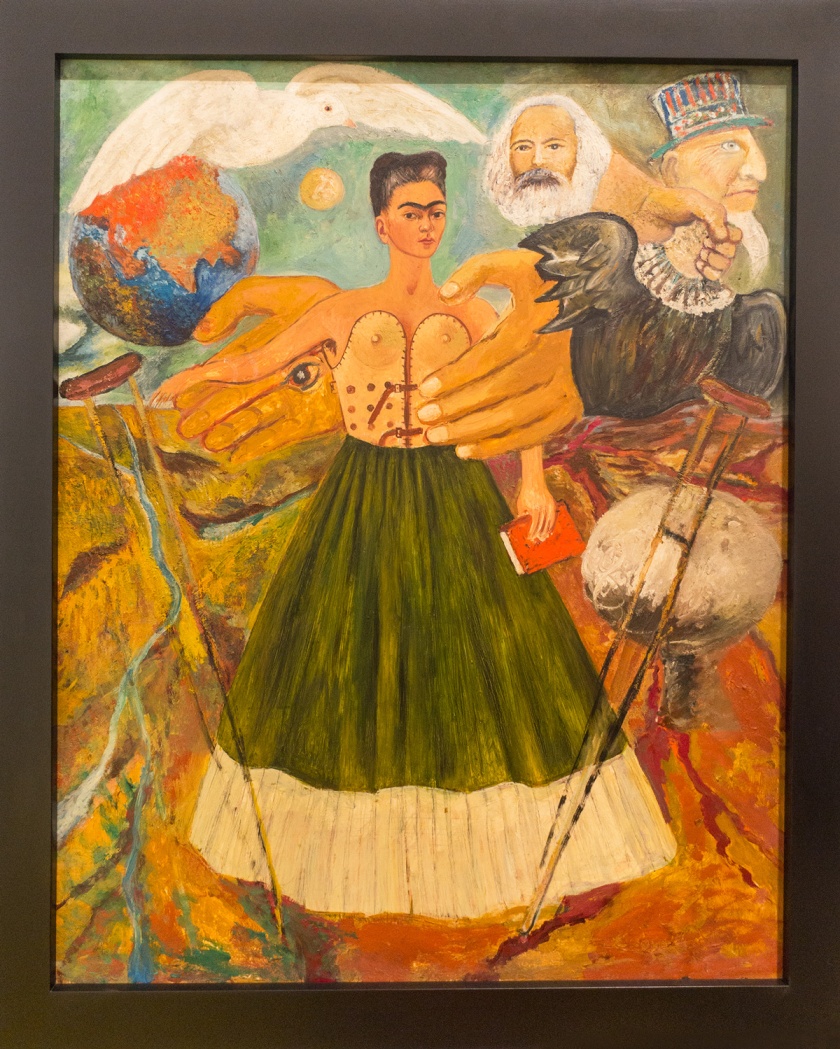 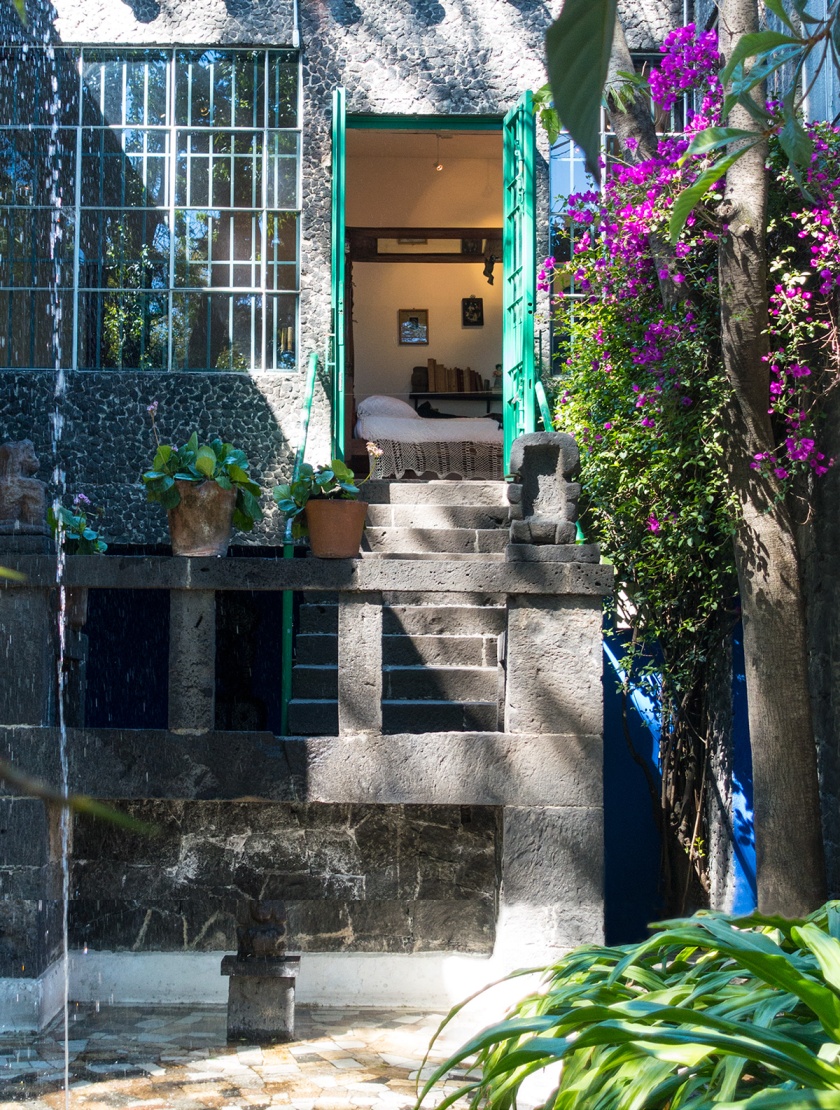 They put a narrow bed in a hallway that have doors that can open up, so that she could lie in it and look out on the garden and listen to the fountain gently splashing outside. There is a shelf with books above the bed within easy reach for her. Even so, for a young woman in so much pain, the days must have seemed infinitely long.

But she was a strong woman that wasn’t going to be defined in any way by her illnesses, she suffered from polio before the accident, or physical shortcomings. Her art was a way for her to express herself.

Her desk in the studio of this beautiful home with the famous blue walls, that reflect back refreshingly cool light indoors.

Here she painted her many self portraits.

This is the bedroom she shared in her married life with Diego Rivera. I think that it’s their love story that touches me the most. “Never in life I will forget your presence. You found me, turned apart and you took me back full and complete.” “Jamás en todo la vida, olvidáre tu precencia. Me acogiste destrozada y me devolviste integra entera.”

She lived her life to the full, though sadly it was way too short. Not only her art but her entire life is so inspiring and shows us, that no matter what kind of difficulties life throws at us one can still despite, or even because of it, create something very special.

I also visited Diego Riveras studio as I had a photo shoot just next door in San Ángel. This is where Diego Rivera and Frida Kahlo both lived and had their studios, and it’s considered a cultural landmark as they are two of the most important artists of the twentieth century in Mexico. Frida had her studio here for a relatively short period of time, whereas Diego painted about three thousand works in his studio.

The painter and architect Juan O’Gorman was a personal friend of Diego and designed these buildings, one of the first examples of functionalist architecture here. One building is red representing Diego and the other one is blue representing Frida. A narrow bridge connect these two buildings on rooftop level and this bridge represents the bond of love between the two of them. It’s a fascinating mix between the fundamental ideas of Le Corbusier on the machinery of living and typical Mexican features such as the bold, strong colours. 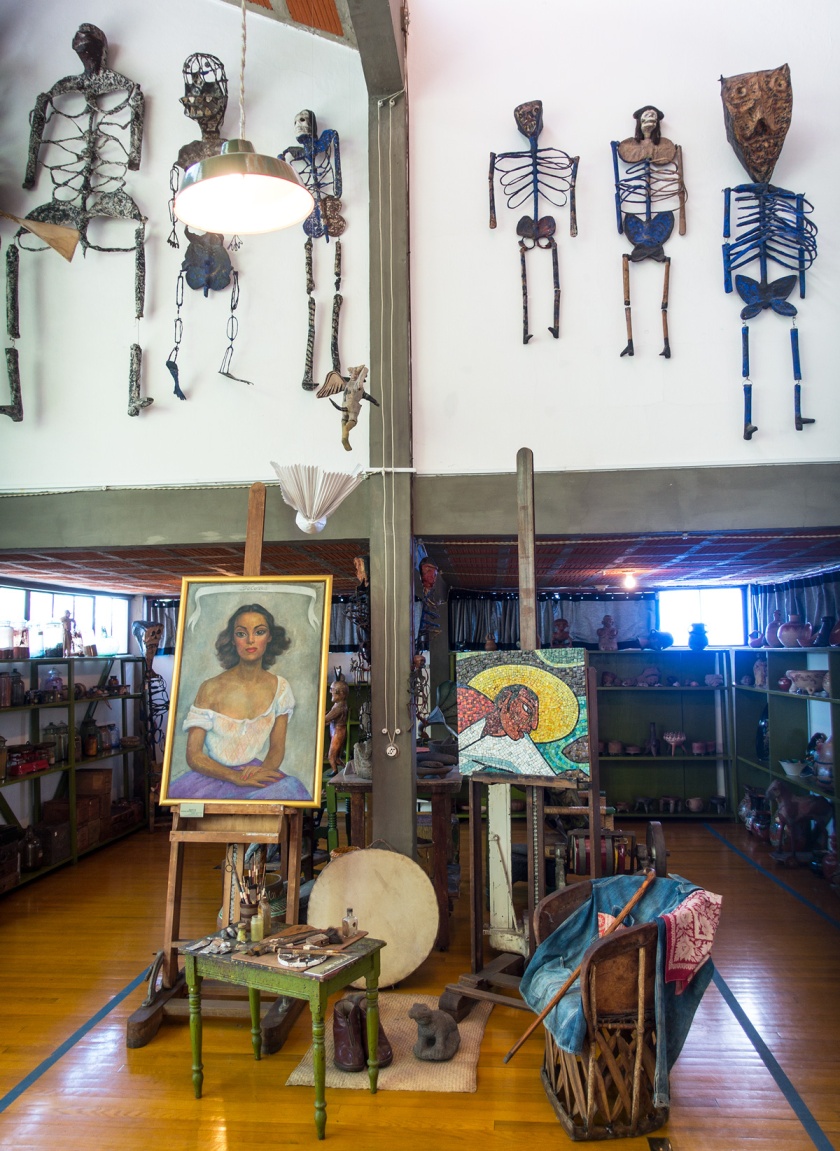 The areas of San Ángel and Coyoacán have old cobbled streets and colourful old houses behind walls that easily transports you back to the time when they were mere villages. Now they are a part of Mexico City.

My stay here is way to short to discover everything this amazing city has to offer. I will be back for sure! ¡Volveré!